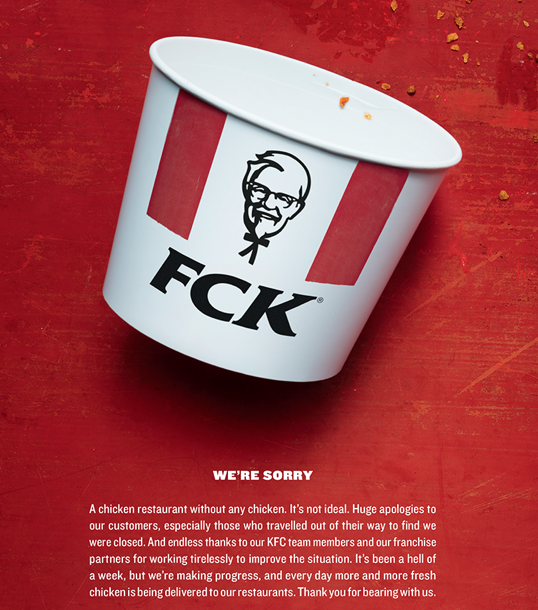 When executed well, a humorous response to a PR crisis can go a long way in mitigating the situation whilst creating a lasting, positive impact on a company’s internal and external stakeholders. It can humanise a brand and make it appear more relatable. In fact, studies have shown humorous content leads to increased interest and better memory recall than non-humorous material.

However, when it comes to a crisis, it’s important to steer away from a ‘one size fits all’ approach. Humour isn’t always a good idea, and businesses need to tread lightly as a poorly judged campaign can have a catastrophic effect on a brand’s public perception. Here are some campaigns that hit the headlines for all the right reasons…

KFC was the subject of the biggest disaster in fried chicken history in February 2018 after announcing it was experiencing a shortage of chicken after switching over to new distribution partner, DHL. However, thanks to a stroke of genius from its marketing team, the fast food chain was able to swiftly divert attention from the ‘clucking nightmare’ by releasing the anagram “FCK” to publicly apologise.

In this case, using humour at a time of adversity encouraged KFC’s stakeholders to empathise with the company and remember that it is, after all, only human. The short and simple ad grabbed the nation’s attention for its honesty and self-imposing humility, which led to a media breakthrough. KFC perfectly demonstrated how sometimes taking a risk and encouraging people to see the funny side can successfully restore a brand’s reputation and placate customer frustration.

British Gas was the brain behind an expertly delivered comical campaign earlier this year with its masterclass advert: ‘Helping every way we can’.

Unlike many businesses that have erred on the side of caution for their campaigns during the coronavirus pandemic, this British Gas ad is the perfect example of how content can be made fun, yet able to deliver a serious message at the same time.

The one minute long advert, set to the renowned, high-energy track ‘Can-Can’ by Jacques Offenbach, shows a typical day during the pandemic from the perspectives of British Gas employees as they respond to emergencies whilst adjusting to social distancing measures, hygiene protocols and working from home just like the rest of us.

With use of playful music and giving the public an insight into the very ‘ordinary’ lives of its hardworking employees, British Gas cleverly makes light of the pandemic whilst demonstrating its engineers’ absolute dedication at a time when the world is fraught.

Both of these campaigns are gold standard examples of how, sometimes, humour can be the best and most effective strategy for responding in times of crisis. However, not all brands get it right…

Bristol Dry Gin attempted humour this June by playing on Donald Trump’s controversial tweet and releasing the promotional post “when the shooting starts the looting starts. Voted No 1 gin by rioters for its complex botanical mix and high flammability.”

Less than one hour later, the company unsurprisingly faced a barrage of angry social media users slamming it for using the unlawful death of George Floyd to market its new product.

The brutal killing and open conflict that resulted from Floyd’s death is clearly not something companies should be making light of – especially for their own profitable gains. Implementing levity at a time when citizens across the globe are rioting for the #BlackLivesMatter campaign, was a very misjudged and harmful move.

Businesses must think carefully before applying humour in a crisis. If done correctly, it can de-escalate a PR blunder and help restore a brand’s reputation. But if they get it wrong, they can risk worsening their situation to the point of no return.

If you want to learn more about how to handle crisis comms the right way, get in touch.

BLOG
We use cookies on our website to give you the most relevant experience by remembering your preferences and repeat visits. By clicking “Accept”, you consent to the use of ALL the cookies.
Cookie settingsACCEPT
Manage consent

This website uses cookies to improve your experience while you navigate through the website. Out of these, the cookies that are categorized as necessary are stored on your browser as they are essential for the working of basic functionalities of the website. We also use third-party cookies that help us analyze and understand how you use this website. These cookies will be stored in your browser only with your consent. You also have the option to opt-out of these cookies. But opting out of some of these cookies may affect your browsing experience.
Necessary Always Enabled

Performance cookies are used to understand and analyze the key performance indexes of the website which helps in delivering a better user experience for the visitors.

Analytical cookies are used to understand how visitors interact with the website. These cookies help provide information on metrics the number of visitors, bounce rate, traffic source, etc.

Advertisement cookies are used to provide visitors with relevant ads and marketing campaigns. These cookies track visitors across websites and collect information to provide customized ads.

Other uncategorized cookies are those that are being analyzed and have not been classified into a category as yet.